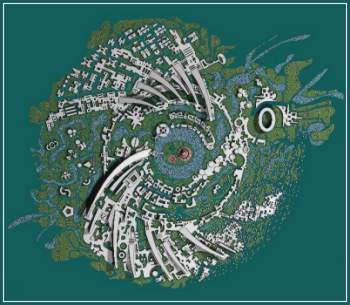 Here is the latest vision about the future that I hold, one which might become a project, who knows.

“I heard the Round City before I saw it. The harmonies of its mathematics evidenced themselves in a soft chant or song, the music of its own particular self.(…)Everywhere around the city, the animals had gathered, drawn and held by this music. They grazed or lay under the trees and seemed to listen, held by contentement. (…)

I passed through another segment of this city into another curved street, which had more people, for there were shops here, and booths and stalls. This was a complete circle inside the outermost one, and was a market all its way – and like every market I have seen anywhere, was all animation and busyness. Another band of buildings, another street, full of cafés and restaurants and gardens. This was thronged, and a healthier friendlier crowd I have ever seen. A pervasive good humor was the note of this place, amiability – and yet it was not clamorous or hectic. And I noted that despite the noise a crowd must produce, this did not impinge on the deep silence that was the ground note of this place, the music in its inner self, which held the whole city safe in its harmonies.”

This is an extract form a book that arrived in my life by chance, an event I have to notice since I have not read any novel for some years now. Indeed, none seemed to catch my interest.

The title is Re: Colonised Planet 5, SHIKASTA, by Doris Lessing 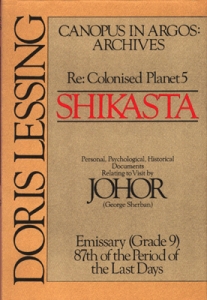 It is a science fiction book but you could almost drop the science of it. It is a take on the history of the human race, showing, as described above, the glory of its beginnings as it thrived under benevolent cosmic influences, watched after by a benevolent race of the Star Beings who implanted us on Earth; the downfall caused by an evil influence on the balance of the planet, down to a low point that is the collapse of our “civilization” in wars and inhumanity. I almost got sick reading the biggest part of the book which describes the damage caused by us on ourselves – interestingly written as reports from the Star Beings who are watching, helpless, the absurdity of our behaviors and their failed attempts over many thousands of years to put the balance back into place.

I here quote an extract of the end, a letter from one of the children who survived it all, as humans climb back into the light, at last.

“I have been to four more towns, all new ones, a triangle, a square, another circle, a hexagon. Do you know something? People are leaving the old towns when they can and making new towns in new places, in this new way. (…)  The people talk about the old town and cities as if they are hell.(…)
Then we were roaming about over the hillside and the plateau. There were about twenty of us doing this. Suddenly we all knew quite clearly where the city should be. We knew it all at once. Then we found a spring, in the middle of the place. That was how this city was begun. It is going to be a star city, five points.
We found the right soil for bricks nearby and for adobe. There is everything we can need. We have already started the gardens and the fields.
The first houses are already up, and the central circular place is paved, and the basin of the fountain is made. As we build, wonderful patterns appear as if our hands were being taught in a way we know nothing about.(…)
I am writing this, sitting on a low white wall that has the patterns on it. People are all around me, working at this and that. We are in tents in the meantime, everything makeshift and even difficult but it doesn’t seem so, and everything is happening in this new way, there is no need to argue and argue and disagree and confer and accuse and fight and then kill. All that is over, it is finished, dead.”

I was really moved. It is a great book (unfortunately, out of print).

Several days later, I could see myself, building new villages with eco-friendly houses, in harmony with nature, and in awareness with the importance of sacred geometry, not only as a tool to feel good, but also to maintain harmony and balance between the inhabitants. As I am quite a solitary creator, It is quite new for me, to think in terms of community.

I discovered sacred geometry thanks to the works of Yann Lipnick, a French geobiologist whose book I am translating into english a the moment. He studies intensely the ways in which the ancients built their temples and sacred locations aligned with cosmo-telluric influences. Fascinating!
I started to look into architecture for development, but nothing really interesting came up for now. I always feel it is missing the energetical dimension, on the scale of a town.

A friend reminded me of Auroville! Of course! That is exactly a new city being built in this day and age.

There is also the Venus Project and the grandiose and enlighteed visions of Jacque Fresco (although I would like to work on a smaller scale). Check out their videos! It’s sci-fi material but it is happening! 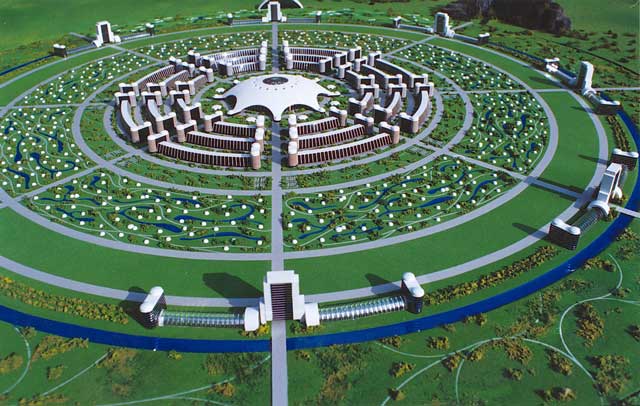 If anyone has other ideas to feed my research, I welcome them gladly.

There is a lot more than can be discussed from the book. My main other focus would be: do we have to go through the hardships of the last age before we can thrive again?…We know that our civilization can get even worse than it is today. Will we have to go through that hard learnt lesson as a race or are we mature enough to skip it?…I guess, we will see, or each person will see, depending on which timeline they are on… (ok, I guess that I will have to write a post about timelines then!)

What amazed me is that Lessing published her novel …in 1979.